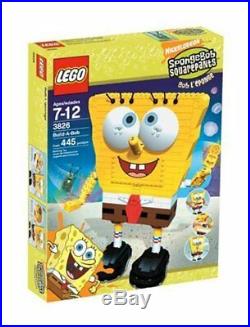 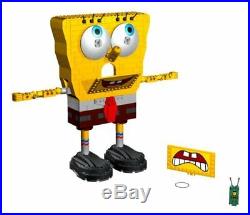 Detailed assembly instructions with 3-dimensional diagrams. Just when you thought things couldn't get any wackier in Bikini Bottom. Plankton has taken over SpongeBob's brain and is making him do some wild things. Plankton can make SpongeBob spin his eyes, shoot jellyfish from his mouth, and change SpongeBobs expression from a frown to a smile. Set includes Plankton mini figure, jellyfish to shoot and much more.

Down in Bikini Bottom, Plankton has somehow squeezed his way into the brain of SpongeBob SquarePants. As Plankton starts flipping levers and turning gears, bubbles shoot from SpongeBob's mouth and his big eyes spin.

Affable SpongeBob, throughout alternating looks of glee and concern, simply goes with the flow. Turn SpongeBob around to see what's on his mind--and how to control it, with instrument panels, moving gears, and a working catapult to launch the bubbles.

The colorful diagrams found in the detailed instruction booklet are invaluable in assembling the 445 pieces of this set, which requires the building skills of an older child or adult. As with all Legos, the design is customizable and compatible with other Lego products. We stand proudly behind the products we sell. LEGO 3826 SpongeBob Build-A-Bob Super Rare Retired Discontinued Item" is in sale since Tuesday, December 11, 2018.

This item is in the category "Toys & Hobbies\Building Toys\LEGO Building Toys\LEGO Complete Sets & Packs". The seller is "greatgoodies4sell2010" and is located in Temple City, California. This item can be shipped to United States, Canada.